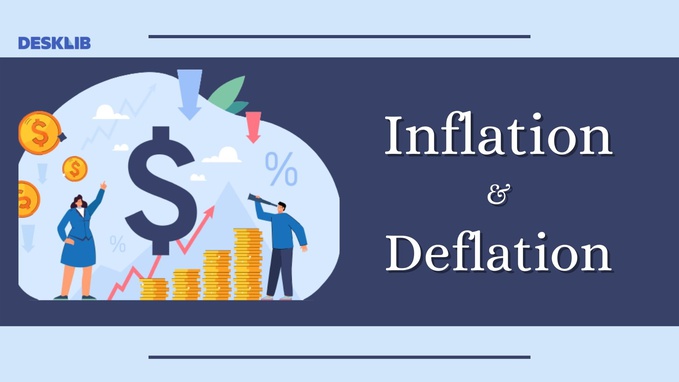 Inflation And Deflation: An Overview

When the prices of goods rise, inflation happens; deflation occurs when the price of goods and services falls. The delicate balance between two economic circumstances, which are opposite sides of the same coin, is difficult to maintain, and an economy can quickly shift from one to the other.

Conversely, deflation is outlined as a general decrease in the worth of products and services, as measured by AN rate of inflation below zero %. Depending on the underlying reasons and the rate of price fluctuations, both might be detrimental to the economy.

Inflation refers to the rate at which the price of goods in a country's economy rises. Inflation occurs when commodities are all in high demand, resulting in a decrease in supply. Supplies can be depleted for various reasons: a major calamity can destroy a source of food, a housing boom might deplete building materials, etc.

People are willing to pay more for the things they want for any reason, forcing producers and service providers to raise their prices.

The rate of increase in the consumer price index is the most popular measure of inflation (CPI). The Consumer Index (CPI) could be a theoretical basket of products that features commodities and services, treatment, and transportation expenditures.

The government keeps track of the prices of the commodities and services in the basket to determine the dollar's purchasing power. Inflation is generally viewed as a major threat, particularly by those who grew up in the late 1970s, when inflation was rampant. When monthly prices rise by more than 50% in a given period, this is referred to as hyperinflation.

A breakdown frequently follows these high price rises in the underlying real economy and a sharp rise in the stock market. While hyperinflations are frightening, they are historically uncommon. It will depend on the causes and level of inflation; inflation can be positive or detrimental. As we will see later with deflation, a complete lack of inflation can be detrimental to the economy.

A small bit of inflation can stimulate spending and investing, as it erodes the purchasing power of currency over time, making it cheaper to buy that $1,000 item today than it would be in a year. The inflation rate also impacts the way modern consumerism changes.

Inflation is caused by multiple reasons such as National Debt, Demand-Pull effect, Cost-Push effect, Exchange Rates but the primary factor which causes inflation is Money Supply. One of the main reasons for inflation is an economy's excess money supply.

This happens once a country's cash supply/circulation grows quicker than its economic process, lowering the currency's worth. Countries have moved away from conventional valuing money depending on the quantity of gold they own in the modern period. Modern money valuation methodologies are determined by the quantity of money, which is then accompanied by the public's perception of the currency's value.

When too many things are available and not enough money flowing to acquire those goods, deflation develops. As a result, products and services decrease costs. For example, if an explicit sort of automotive becomes very common, different makers can begin to provide a vehicle that's identical to contend with. Car firms will soon get more of that vehicle model than they can sell, forcing them to lower the price to sell the automobiles.

When a firm has an excess inventory, it has to decrease its expenses, which frequently results in layoffs. At leisure, folks don't haven't enough cash to shop for things; thus, costs are reduced to tempt them to shop, which perpetuates the cycle.

What Is The Deflation Rate?

When credit suppliers notice a visit price, they often prohibit the amount of credit accessible. This causes a credit constraint, as customers' area units cannot get loans to get large-ticket things, effort businesses with excess inventory, and any deflation.

Price declines that are uncontrolled, such as inflation, may lead to a dangerous deflationary spiral. When total production falls, and demand for investment and consumption dries up during a phase of a recession crisis, such as a recession or depression, this situation arises.

As makers square measure compelled to lose inventory that consumers now not would like to shop for, this might result in a general decrease in plus costs. Businesses and consumers alike begin to hoard liquid cash reserves to protect themselves from future financial loss.

As more money is saved, less money is spent, lowering aggregate demand further. People's expectations for future inflation are likewise lowered, and they tend to hoard money. Consumers may expect their money to have more spending power tomorrow, so they have little incentive to spend money today.

Many factors cause Deflation, like capital market structural changes.

When companies selling identical services or goods compete, they often lower their prices to gain a competitive advantage. Secondly, when increased production efficiency results from innovation and technology, it lowers prices for goods and services.

Many inventions have had an impact on the broader economy as well as the productivity of individual industries. The drop in money supply will lower the cost of goods and services, making them more accessible to the general public.

1. Customers Should Be Treated Differently.

Instead of making broad pricing changes, utilise surgical price increases based on a customer's or segment's cost to service, position in comparison, and worth to the provider. When capacity is limited, don't be afraid to turn down one low-value consumer favouring a more appealing customer or sector. If this happens, don't punish your sales crew.

2. Price Is Exchanged For Other Valuable Characteristics

Prepare for clients who will oppose a straight increase by providing additional benefits. A few examples are volume assurances, bundled items, and altered service levels.

3. Ensure That What Is Already Written In The Contract Is Followed

Many businesses include price rise contingencies in their contracts, but they are rarely enforced, and they may not even be aware of them. Check each customer's contract terms, assess the value of implementing them, and arm personnel with the necessary data and scripts to handle a difficult conversation confidently.

Customers should be notified immediately, especially if terms were waived during the outbreak, to avoid unpleasant surprises later.

4. Make Changes To The Product Mix

What a corporation makes can be more significant than who it sells to during a moment of hyperinflation and supply shocks.

It's vital to get a current perspective of profitability at the SKU level, not only the customer level. Cutting some marginally profitable goods makes sense, in the same way terminating poor customers.

- The main drawback of deflation is that it causes unemployment because prices of goods fall, resulting in lower profits for companies, forcing them to reduce the production of goods by cutting prices in industries or even closing some factories, resulting in mass layoffs workers. Since the economy is under deflationary pressure, there is no space for new job opportunities, and that is why the number of unemployed people is rising by the day.

-  Deflation appears to be beneficial at first because prices are falling. Still, as time goes on, deflation has shown its real destruction in the form of reduced wages or salaries for employees because companies aren't making enough money to pay them, lower production, and lower growth, all of which affect everyone and lead to a vicious circle in which no corporate entity wishes to acquire, and everybody wants to keep cash on hand.

- Individuals or businesses that have already taken out a loan are the hardest hurt. They will have to pay a greater interest rate when the time value of money reverses in a deflationary environment. In basic terms, cash reigns supreme in deflationary times since cash holders benefit while asset holders suffer losses as the value of assets declines.

How Does Deflation Affect The Economy?

Education and healthcare are two areas of the economy that have historically been well-insulated from economic downturns, as their expenses and prices may rise. At the same time, the overall level of pricing for most products and services falls.

The bottom line is that most central banks worldwide aim for mild inflation rates of roughly 2%–3% per year. Inflationary pressures can harm an economy because they lead prices up too quickly, sometimes outpacing wage increases.

On the other hand, deflation can be negative for an economy because consumers hoard money rather than spending or investing in the assumption that prices will fall even further.