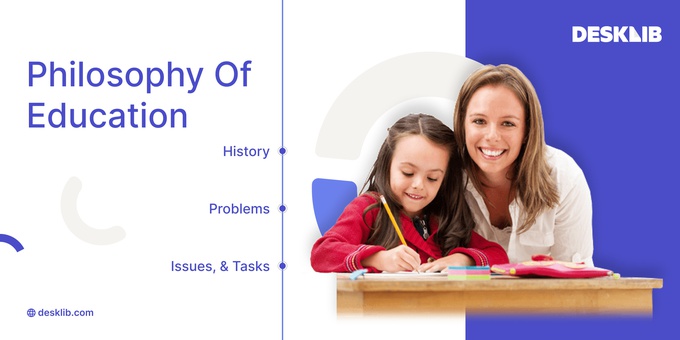 An Overview of Philosophy Of Education

An Overview of Philosophy Of Education
Category : Teaching and Learning,
Description :

The philosophy of education is an applied philosophy discipline that studies the nature of education, as well as its goals and difficulties. It covers an analysis of educational ideas, their underlying assumptions, and the arguments for and against them.

It is an interdisciplinary field that draws inspiration from both within and outside of philosophy, such as ethics, political philosophy, psychology, and sociology. These relationships are also evident in the philosophy of education's enormous and far-reaching influence on other fields.

In contrast to normative theories, which consider how education should be applied or what is the best form of education, descriptive theories offer a value-neutral explanation of what education is and how to comprehend its essential principles.

History of the philosophy of education and major historical figures

The history of the philosophy of education, like the history of education itself, is an essential source of concerns and issues for shaping the intellectual agenda of modern philosophers of education. The variety of contemporary approaches to the problem is also noteworthy.

The roots of the philosophy of education lie in the school of western philosophy which originated in ancient Greece. The key historical figures created philosophical perspectives on education that were incorporated into their larger metaphysical, epistemological, ethical, and political ideas.

Socrates' introduction of the "Socratic method" of questioning began a tradition in which reasoning and the search for reasons that might justify beliefs, judgments, and actions was (and still is) fundamental; such questioning eventually gave rise to the view that education should encourage, to the greatest extent possible, the pursuit of the life of reason in all students and persons.

Despite significant disparities in their other philosophical ideas, most of the important figures in the history of the philosophy of education have shared this notion of the centrality of reason in teaching.

Then, Plato, Socrates' student, agreed and held that a primary aim of education is to make students appreciate reason and be reasonable, which for him meant prioritizing wisdom over pleasure, honor, and other less-worthy pursuits. In his discourse Republic, he outlined a vision of education in which different groups of pupils would receive various types of education based on their abilities, interests, and social status. Many consider his utopian vision to be a forerunner of what is now known as educational "sorting."

Afterward, Plato his student Aristotle believed that the primary goal of education was to cultivate excellent judgment or wisdom, but he was more hopeful than Plato about the average student's potential to acquire it.

The current interest in "virtue theory" in ethics and "communitarianism" in political philosophy is a reflection of his emphasis on virtue as well as his insistence that virtues develop in the context of community-guided practice and that the rights and interests of individual citizens do not always outweigh those of the community.

Of course, there are many more figures in the history of the philosophy of education than Socrates, Plato, Aristotle, Rousseau, and Dewey. Other major philosophers who have made significant contributions to educational thought include Thomas Aquinas, Augustine, Thomas Hobbes, René Descartes, John Locke, David Hume, Immanuel Kant, John Stuart Mill, Karl Marx, Bertrand Russell, and, more recently, R.S. Peters in the United Kingdom and Israel Scheffler in the United States. It is worth repeating that, despite their many philosophical differences, qualifications, and emphasis variances, practically all of these figures believe that the primary goal of education is to cultivate rationality.

From above we got to know about the primary goal of the philosophy of education.

Let’s know about the issues related to it.

Problems and issues related to the philosophy of education

What are the right objectives and overarching ideals of education? is the most fundamental goal-related issue in educational philosophy. What standards should be used to assess educational initiatives, institutions, routines, and outcomes?

Philosophers and other educational theorists have proposed a number of goals, including:

All of these proposed goals have faced a lot of criticism and need to be carefully articulated and defended. Both modern and historical philosophers of education have devoted themselves, at least in part, to defending one conception of the objectives of education or to refuting other conceptions.

The wide variety of objectives put forth highlights the need for the philosopher of education to draw from other branches of philosophy, other academic fields (such as psychology, anthropology, sociology, and the physical sciences), as well as educational, practice itself.

It is unfortunate that current discussions of educational policy rarely address the issue given that taking into account education's right purposes is of basic relevance for the wise direction of educational activities.

The tasks and the goals of the philosophy of education

Philosophy has long been thought to be primarily concerned with the definition of ideas like knowledge, truth, justice, beauty, mind, meaning, and existence. The clarification of fundamental educational ideas, including the idea of education itself as well as associated ideas like teaching, learning, schooling, child-rearing, and indoctrination, has therefore been one of the goals of the philosophy of education.

Moving to the next goal of the philosophy of education is the topic of legitimacy, power, and authority. The topic of legitimate authority has come up recently in the US in relation to the use of standardized testing, which some detractors claim unfairly targets kids from certain cultural, racial, religious, or ethnic groups (because the test questions rely, implicitly or explicitly, on various culturally specific cues or assumptions that members of some groups may not understand).

What authority should members of purportedly oppressed groups have in such contentious situations to defend their kids from prejudice or injustice? The answer to this query, like the others addressed above, might be partially influenced by whether the specific school is public (funded by the state) or private.

Overall, These issues are primarily ones of ethics and political philosophy, but they also call for consideration of metaphysics, philosophy of science, psychology, and other branches of philosophy, social science, and law.

The list of challenges, tasks, and problems described above is always incomplete, and for most of them, there have been few or few solutions proposed. The inherent openness of philosophical inquiry plays a role in this.

However, some proposed solutions are superior to others, and philosophical discussion and analysis have helped to highlight this distinction. This is valid for philosophy in general and for educational philosophy in particular. Lets us conclude by taking a crux and overview of the philosophy of education.

Societies that respect education and desire that it be carried out in a deliberate and informed manner do themselves a grave disservice by ignoring the philosophy of education.

Perhaps the most fundamental and inclusive subject of applied philosophy, it has a vast range of relevance, application, and possible impact.

Step-by-step Guide For How to Write a Dissertation?