The Australian Indigenous Communities will be discussed in two parts in this study. We explain why indigenous Australians are still disadvantaged when it comes to healthy community services in the first one, and we describe the influence it may have on the nurse care they receive at an Australian Health Service in the second. 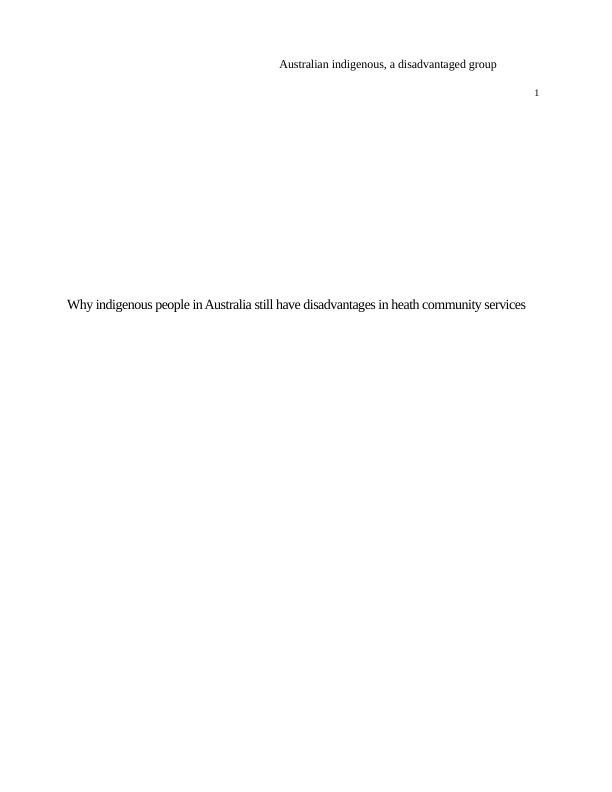 Australian indigenous, a disadvantaged group21.IntroductionIn 2012-2013, the Australian Aboriginal and Torres Strait Islander Health Survey pointed out some health issues faced by Australia’s indigenous community[ CITATION ABS13 \l 1033 ]. The data collected by the Australian Health Survey (AHS) revealed unusual health issues among the Aborigines who are Australia’s indigenous communities. The research compared Aborigines in remote and those in non-remote areas. With a population of 9,300, the survey made conclusive remarks about their blood, urine, nutritional and chronic health tests. Its key findings identified a health trend of chronic illnesses in the group and well as unhealthy behavioral patterns. Its outcomealso highlighted poor health caused by poor nutrition, and lifestyles diseases like diabetes and addictions. The group detailed findings for different age groups including adults, teenagers and children. It made a record of health related conditions, disabilities, alcohol and drug abuse, social and emotional wellbeing, cultural identification, women’s health and family stressors among others. Linked to demographic measures of age, diet, blood pressure, substance use, health status, food security among others, the findings confirmed researcher’s fears of general health effects, long-term conditions, and health risk factors on Aborigines[ CITATION Lor16 \l 1033 ]. The results showed that 67.4% had long tern health effects, 35.7% had disabilities and 30.1% of adults had psychological depression. 18.0% engaged in alcohol and risky behavior while family stressors affected 73.4%.2.Historical BackgroundResearch highlights the importance of nature and nurture in the complete development of the Aboriginal community in Australia[CITATION Jel17 \l 1033 ]. In 1950-1960, the Maralinga Nuclear Testing by the British adversely affected the indigenous people in Australia[CITATION SBS14 \l 1033 ]. Dreaming trucks sent to Maralinga a dwelling place for the Aborigines had 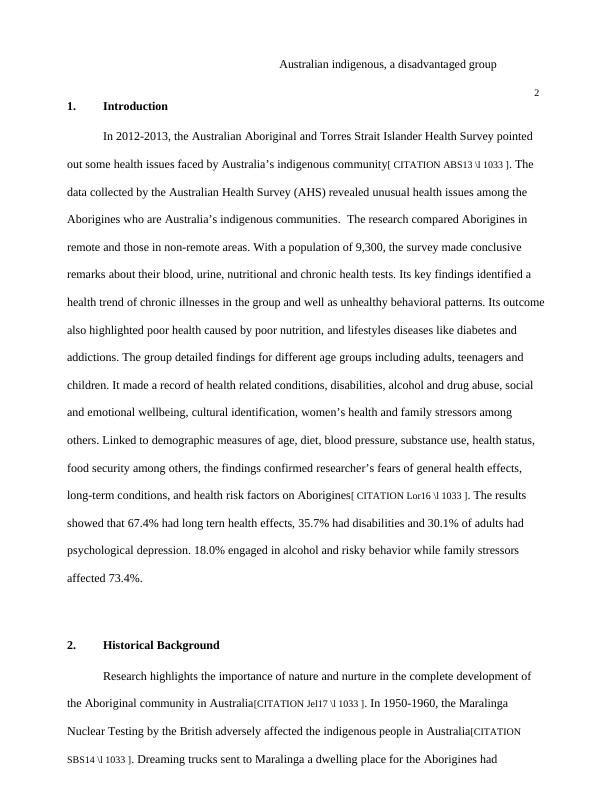 Australian indigenous, a disadvantaged group3radioactive material Plutonium used for nuclear tests. This has dangerous reactors that blinded animals living in the environment. Its components, the actinide is harmful to people living in overpopulated areas, it causes body defects, health complications, cancers, and it lowers the immune system. The deliberate exposure of the Aborigine to an environment with nuclear matter was like using them as guinea pigs in a nuclear test. Exposing them to radiation led to contamination of their natural environment. The discovery of the situation led to their evacuations and attempts to clean them up by scrubbing their fingernails while not explaining the actions. Although the people received compensation in $13.5 million dollars, to date there are claims that this race is more prone to health complications. The health alienations increased their mortality ratebecause of poor nutrition, psychological problems, addictions and abnormal blood pressure. This was a vulnerable community leaving in a hardship area with limited access to health care. Some of the hindrances include long distance from amenities[ CITATION Fri15 \l 1033 ]. Historical injustices further indicate violations and destruction of a generation during colonial periods[ CITATION Ahm01 \l 1033 ]. By 1910-1970, the aborigine children faced separation with their families. Close to 100,000 in their early childhood were culturally alienated. The giving of children to white families by police kept a generation away from their families. With no records to help them trace back their roots, they lost the privilege of learning their culture, language and values. Such alienation has physical, emotional and social effects. As a result, most of them grew up without a sense of belonging. This destroyed their self-esteem giving them a sense of loneliness,unworthiness and insecure. It was common to find most of them depressed and some committed suicide. Those who could not bear the pressure turned to crime, and addictions. Mass murders, economic oppression and slavery describe 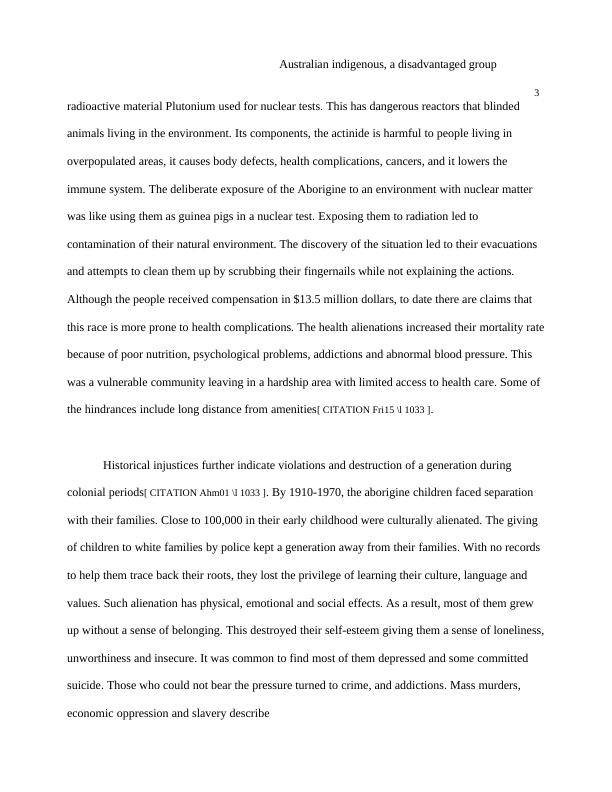 Australian indigenous, a disadvantaged group43.Contemporary Concerns An Aljazeera report about the injutices faced by Aboriginal Australians indicate a gap between the inidgineous and non indigeneous Australians (2014). Some of the inequalities include reduced life expectancies, alienation from social rights such as education, sources of income, professional development and opportunities in life. Lack of employment contributes to the already existing social issues of poverty, and lack of quality health care. These challenges reduce life expectancy and contribute to desperation. Poor diet due to lack of food also leads to poor maternal health, childhood mortality and common diseases. When young children and infants fail to get the necessary benefits of health they face health challenges such as chronic illness and are prone to infections. The unsafe environment is a health risk because of poisons, and respiratory illnesses. There are challenges of culturally unsafe healthcare represented by the white system. The lack of government support for this minority group has come under criticism. The community covers a small percentage of the population at just 2% of the country’s population. However, these 23million alienated Australians continue to face inequalities in the work place[ CITATION Alj14 \l 1033 ]. There are more reports about high suicide rates, homelessness and poor health.Reports about the incarceration of the indigenous continues to cause deaths. Humanitarian activists also point out that there are indications of police brutality and welfare violations. The inhumane treatment of the aborigines brings back memories of historical maltreatment of the group. Evidently, the long-term challenges of historical injustices have trickled down to the population. Discrimination keeps widening the social gap and it is evident in the young generation in schools system. This raises questions about the coexistence of the two races in future. Some suggest that the stakeholders must come to an acceptance of the violations in the past and in the present[ CITATION Geo14 \l 1033 ]. The news report expresses unrest over the fact that Australia is 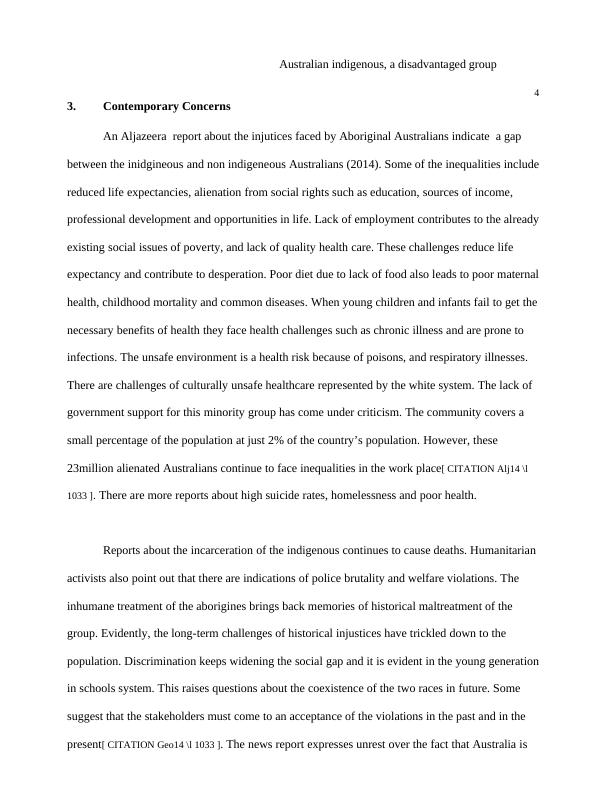 Finally, Australia's Aborigine law recognizes the indigenous people's legal existence. However, the bulk of people are against it because they don't grasp the background.

Students who viewed this