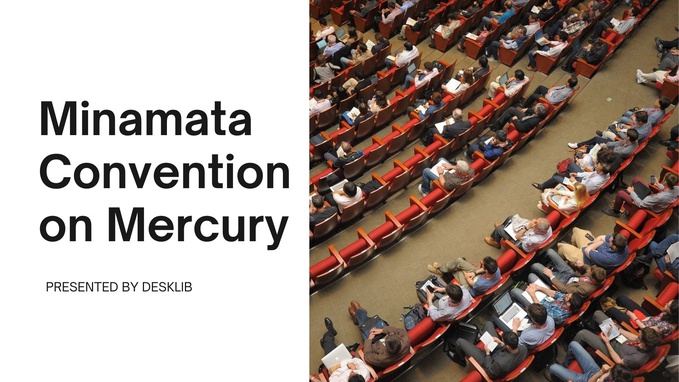 The Minamata Convention on Mercury

What is Minamata Convention on Mercury?

The Minamata Convention on Mercury is a Multilateral Environmental Agreement (MEA) that draws attention towards the metal, Mercury. The treaty's goal is to protect the environment and human health from hazardous heavy metal emissions. The convention looks after the entire life cycle of mercury and controls its usage in a wide range of products and industries. The pact also covers the direct mining of mercury, as well as it's export and import, safe storage, and waste disposal.

This Convention was a result of three years of meetings and negotiations, after which the text of the Convention was approved by delegates representing close to 140 countries on 19 January 2013 in Geneva and adopted and signed later that year on 10 October 2013 at a Diplomatic Conference held in Kumamoto, Japan.

How did the Minamata Convention come into the act? History

The Minamata Convention is named after Minamata, a Japanese city that suffered from decades of mercury poisoning after industrial wastewater from a chemical industry was spilt into Minamata Bay. Methylmercury was found in the effluent, which bioaccumulated in the bay's fish and shellfish. Locals who ate fish from Minamata Bay fell extremely ill, and many died or were seriously crippled as a result.

In October 2013, finally, the international convention realized the global problem of mercury pollution. It took four years to make the convention and finally on 16 August 2017, it came into force with some mandatory and elective measures. The convention consists of 35 articles, 5 annexes and a preamble. Out of 135 parties to the treaty, 128 have signed it as of 2021.

The fourth meeting of the Conference of the Parties to the Minamata Convention on Mercury (COP-4) was decided to be organized in two-phase; the first phase was conducted online from 1-5 November 2021, seeing the COVID-19 situation and the second phase is set to be conducted in-person in Bali, Indonesia from 21 -25 March 2022 by Rosa Vivien Ratnawati as the President of COP-4.

Need for the Global Responses

Risk of Mercury on humans and the environment

Mercury is an element found organically in nature. It can be released into the environment from both natural and human sources, including weathering of mercury-containing rocks, forest fires, volcanic eruptions, and geothermal activity. Each year, an estimated 5500-8900 tonnes of mercury are emitted and re-emitted into the atmosphere, with much of the re-emitted mercury, as well as the direct releases, being linked to human activities.

With its unique properties to remain liquid at room temperature and easily infuse with other metals, it has been known to utilize for scientific, medical and day to day purposes, to name a few, in house paints, to treat syphilis, as a contraceptive, as a sedative, in cosmetics, to extract gold, in producing PVC, used in electrical switches, fluorescent light bulbs, dental amalgam.

But what we failed to realize is its toxic nature, human activities had increased the atmospheric concentration by about 450 % above the natural. And once mercury arrives in soils and waterways, microbes convert it into methylmercury, the most poisonous form of the element, which builds up in the food chain. And when people eat contaminated seafood they get exposed to methylmercury resulting in a devastating effect.

Why Global Response is needed?

Mercury contamination is a worldwide issue that necessitates international action. It travels by air and water, crosses national boundaries, and can travel thousands of miles through the atmosphere. Hence domestic efforts are not enough to curb the pollution, global communities have to come together to address this issue before it slips out of the hand.
Mercury has a long environmental shelf life and a global pathway, as it cycles between the atmosphere, the ocean, and land. This is why the international community chose a global response strategy to tackle the mercury problem throughout its entire life cycle.

What is the Minamata Mercury convention and what are its goals?

The Minamata Convention on Mercury is an international environmental treaty that focuses on particular human activities that contribute to mercury contamination. This agreement's implementation will aid in the reduction of worldwide mercury pollution in the next decades.

Who signed the Minamata Convention?

On the first day of the Minamata Convention European Union and 86, countries signed the convention. Out of 135 parties to the treaty, 128 have signed it as of 2021.

How many countries signed the Minamata Convention?

As of now, 105 parties and 128 Signatories are part of the Minamata Convention.

Wow, superb weblog structure! How lengthy have you been blogging for? you made blogging glance easy. The entire look of your website is fantastic, let alone the content!

Usually I do not read post on blogs, but I wish to say that this write-up very pressured me to try and do so! Your writing style has been amazed me. Thanks, very nice article.

Hey there, You have done an excellent job. I will certainly digg it and personally suggest to my friends. I'm confident they will be benefited from this site.

hi!,I really like your writing so much! share we be in contact extra approximately your article on AOL? I need an expert on this space to unravel my problem. Maybe that is you! Having a look forward to look you.

We're a bunch of volunteers and starting a brand new scheme in our community. Your web site provided us with helpful info to work on. You have done a formidable task and our whole community can be grateful to you.

Howdy very cool website!! Guy .. Excellent .. Superb .. I will bookmark your web site and take the feeds also? I'm glad to find so many helpful information here in the publish, we need develop extra techniques in this regard, thank you for sharing. . . . . .

It is in point of fact a great and useful piece of information. I am happy that you shared this helpful information with us. Please keep us informed like this. Thank you for sharing.