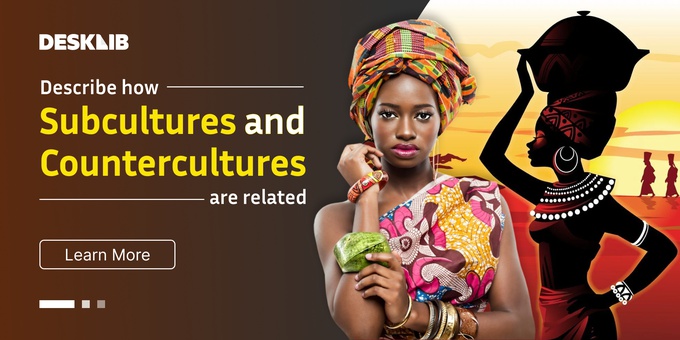 A subculture is a group of people who set themselves apart from the larger culture to which they belong. A contrast between an acceptable majority style and a "subculture" as an active minority style existed in the early 1950s. A subculture, according to Dick Hebdige, is a transgression of normality. Subcultures frequently have a bad reputation and a critical mindset. Subcultures unite people who feel ignored and give them a place to find their identities.

The sociological word "counterculture" defines a cultural group's values and behavioral standards. Another way to define counterculture is as a group whose actions differ from the accepted norm. Although there have been distinct countercultural undercurrents in many societies, the term "counterculture" in this context refers to a more significant, obvious phenomenon that reaches critical mass and lasts for a while. It's crucial to understand the difference between "counterculture" and "subculture".

A subculture is a group of people who do have some characteristics in common with the bulk of society, but the group also has its own set of values, beliefs, customs, behaviors, etc. Subcultures frequently emerge when a society faces challenges or enjoys shared perks. A subculture typically consists of people who share similar values and interests.

There are various subcultures and the main categories of the subculture are listed below:

What is a Subculture?

A subculture is a subset of a larger culture that a minority of people share and actively engage in. Although their ideas or way of life may be distinctive enough to make them stand out, they do not oppose society.

Examples of subcultures include Goths, emos, surfers, and homies, among others. Subcultures exist in the United States; two examples are Jews and Tea Party supporters. The Tea Party movement was primarily established around discontent with the political status quo, in contrast to the Jewish subculture, which is based on shared religious principles.

Subcultures frequently have shared experiences and interests. Within a mainstream culture, there may be subcultures. Subcultural similarities in aesthetics, interests, and experiences bind them together. Subcultures are different sectors of a society or region's broader culture that are distinguished by similar socioeconomic levels, membership in a particular ethnic or religious group, or interests in music or other cultural phenomena.

SIMILARITIES AND DIFFERENCES BETWEEN SUBCULTURE AND COUNTERCULTURE -

There are a number of factors, including the fact that some changes were the result of a series of events that occurred throughout the century, other changes were brought about by scientific advancements, which have always resulted in new ideas and perspectives on the world, and many changes are better characterized as movements or ideologies, the term "counterculture" is not entirely adequate to describe all of the changes that occurred.

Subcultures enable people with comparable interests a chance to socialize, assimilate, and feel a feeling of community among their peers.

In order to explore the organization and creation of relational, material, and symbolic structures and systems, subcultural studies frequently employ participant observation and may focus on sociological, anthropological, or semiotic study, among other things.