NURBN2008 - Nursing Dementia Patient: Essay Report, In contrast to the terminally ill patients who require palliative care services for the management of their condition, the ones afflicted by dementia-like disorders are shrouded with impediments that hamper their quality of life significantly. Dementia has been identified as a debilitating syndrome that causes progressive deterioration of the cognitive brain functioning encompassing memory, perception, reasoning, understanding, and behavior. The geriatric population is more vulnerable to acquiring this condition and the majority of the incidences reportedly occur at age 65 years or more. Data in the contextofAustraliafor the year 2014 has revealed that dementia including Alzheimer’s disease is the second leading cause of death accounting for 7.8% of total mortalities in Australia. 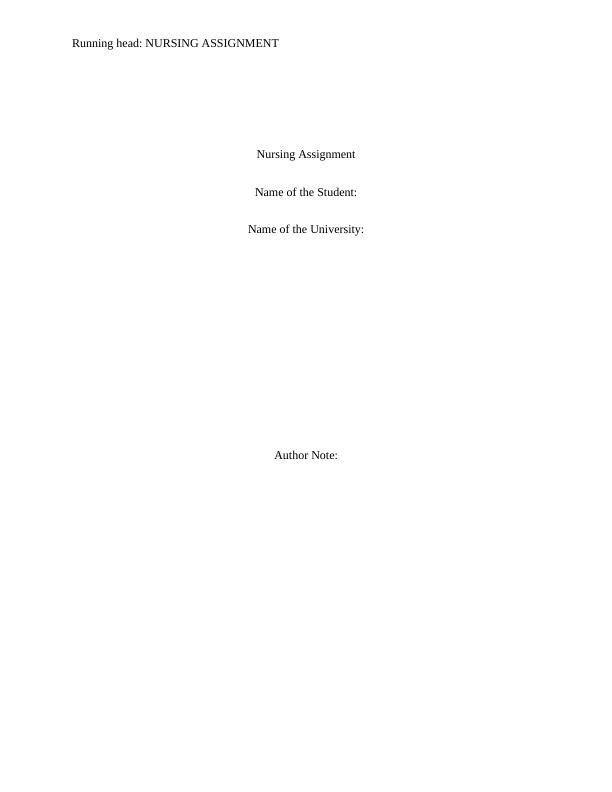 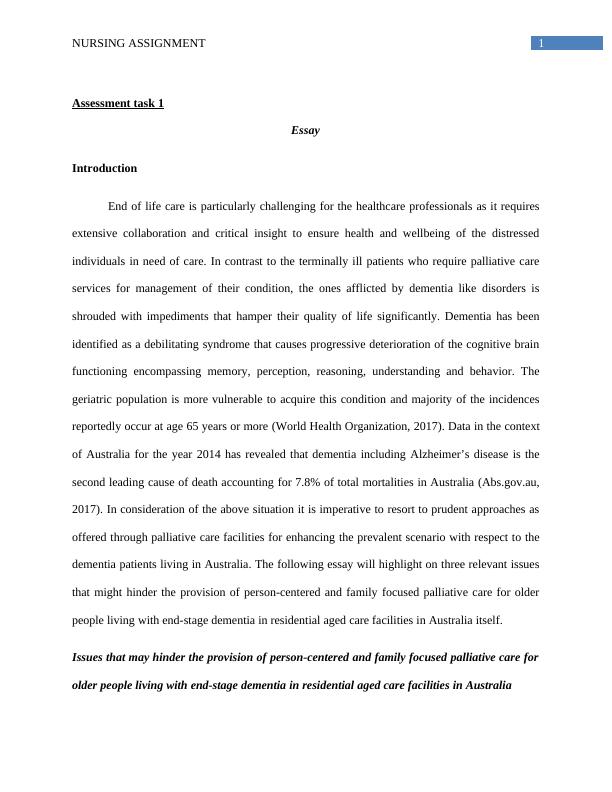 2NURSING ASSIGNMENTRendering person-centered and family focused palliative care for older people thrivingwith end-stage dementia in case of aged care facilities may be disrupted due to pervasiveness ofvarious issues such as paucity of access to palliative care, communication problems and faultypain management. These issues impede the proper management of the deleterious healthcondition of dementia that tends to rob oneself of her personal stand. Lack of access to palliative care Dementia is a potentially debilitating illness in which the declining cognitive status of theaffected person majorly influences the judgment, reasoning, memory and communication skillsthereby posing threat to the victims. Hence, providing adequate and most appropriate treatmentintervention is a challenging task for the healthcare professionals. Moreover, end stage dementiais particularly hard to handle due to insufficient and considerable knowledge acquisition on thepart of healthcare professionals in addition to limited resources and dearth of curative therapies.Transcending the traditional care with respect to dementia patients, novel and improvedhealthcare practices are required to remedy the sufferings of the dementia affected patients aswell as their families thereby providing opportunities for maximizing the quality of life of themacross various stages of illness. Poor outcomes because of end of life issues in dementia patientsis of particular botheration as it tend to jeopardize the stability in a person’s life and incur threatsto health (Lee et al. 2017). Further, researches carried out with respect to the provision of end-of-life care depicted that despite being a terminal illness condition; dementia is often underminedthat leads to inadequate healthcare delivery. People with end stage dementia do not have accessto most suited end-of-life care needs that compromise their healthcare outcomes in a major way.In contrast to other terminal illness, stereotype and stigma is attached with dementia that makes itmore difficult to combat the adverse outcomes. Difficulty in dementia diagnosis coupled with 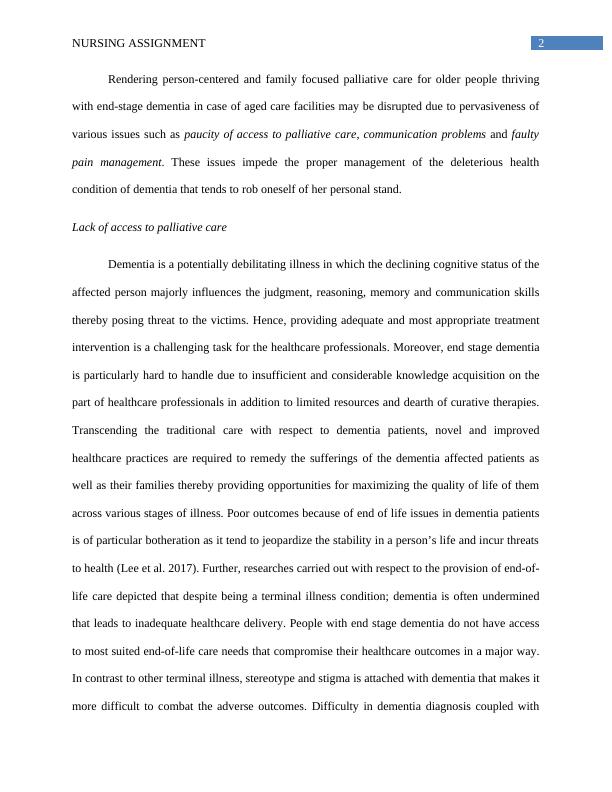 3NURSING ASSIGNMENTlack of education regarding the disorder by the healthcare workforce, families and caregiverspredisposes the vulnerable group of elderly population to encounter the wraths and negativerepercussions. Inability to detect complications associated with end stage dementia by thehealthcare professionals further aggravates the problem and harness poor end-of-life outcomes tostrategize suitable interventions based on the individualized needs of the affected dementiaperson. The composite needs of the victims are not succinctly addressed due to such negativeresults emanating from dearth of clinical expertise and insight for recognizing the specificsymptoms of dementia. Fewer referrals to suitable palliative care facilities are another majorhindrance (Dowling et al. 2015). The culturally, linguistically and ethnically diverse groups areparticularly susceptible to face discrimination in terms of access to healthcare and equity inservice provision. Therefore, timely diagnosis and prompt intervention are delayed thatprocrastinates the chances of recovery of the dementia patient in a huge manner. Adequatenavigation of the healthcare system if not fulfilled satisfactorily has the ability to diminish theservice outcomes for dementia patients in spite of exhibition of similar symptoms like that ofpain, confusion, agitation, lack of sleep and eating as happens in terminal illness like cancer(King, Goeman and Koch 2015).Communication issues In contemporary healthcare sector, communication is considered crucial andcomplementary to other modes of therapeutic interventions for deriving optimal benefits for thedistressed patient. In case of dementia-affected patients, similar results may be expected out ofappropriate following of communication strategies. The affected individuals may not alwaysverbally articulate sufferings instead, they may resort to expressing their issues of concernthrough behavioral gestures and similar symptoms. Functional decline of the dementia sufferers 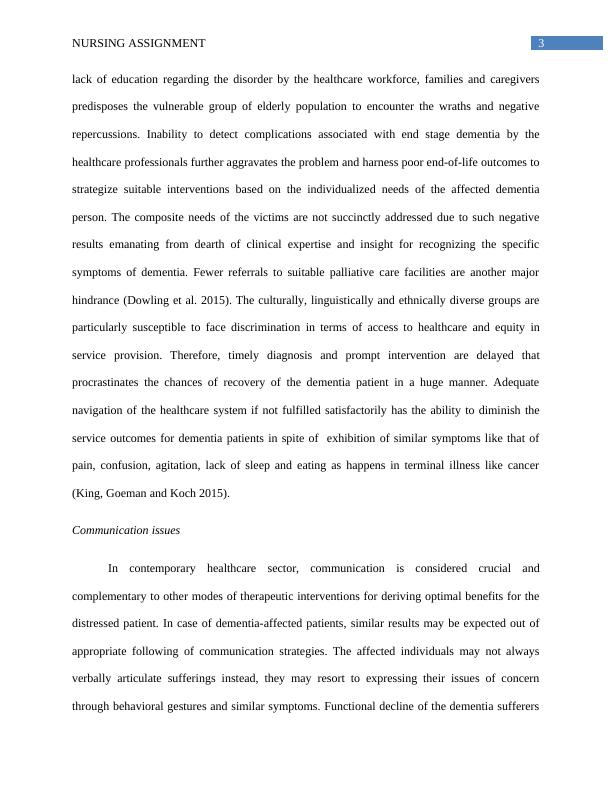 In conclusion, Critical evaluation of the condition prevalent among dementia patients receiving end-of-life care has brought to the forefront the barriers to management of such individuals within the residential setting framework of the palliative care unit. To date no cure for dementia has been discovered, however alleviation of the symptoms associated with the disorder has been found to be effective in tackling the situation specific to the patient. Therefore, it must be ensured so that they get access to specialized palliative care health services at par with others suffering from a terminal illness. Accurate assessment and interpretation of the patient situation carried out by the nurses and other healthcare personnel are crucial to treating them holistically by catering to their individualized needs. Pragmatic observation of both verbal, as well as non-verbal communication, is beneficial in this respect where the nurses may satisfactorily acknowledge the distinctive scenario.

Students who viewed this