In modern times Wireless Networks have become popular everywhere from business organizations to individuals. We can point out the significant growth in the use of wireless networks everywhere. Regardless of size and type of organization, all the sectors are using the wireless network for its affordability, flexibility, easy to configure function. But when comes to security there is no single technology with no vulnerability. The same thing applies to wireless networks also. As technology grows the security threat also grows along with it. So, it’s important to develop strategies to combat the threats against wireless networks.

Wireless Security threats in the given network design 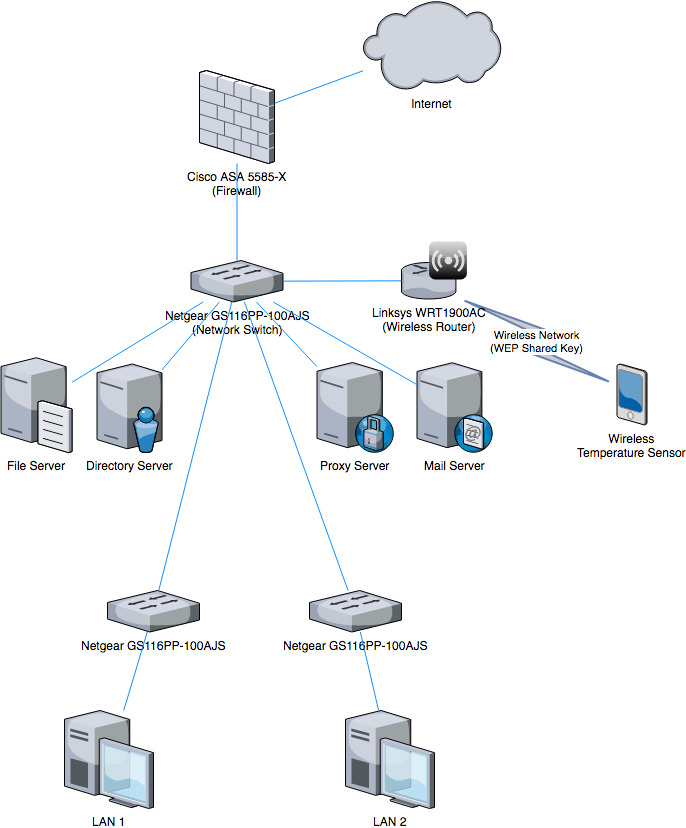 WEP stands for Wired Equitant Privacy. WEP is a security protocol comes under IEEE 802.11 standards (Margaret, 2006). It was originally introduced in 1997. WEP aimed to secure the wireless network as secure as wired networks. WEP has several security flows and it can be compromised for several attacks. Some of the attacks are (Issac, n.d.) active attacks to decrypt the traffic, active attack to inject the packet, and table-based attack (typically uses a decryption table). Apart from those primary attacks, few other attacks are (Packt, 2015) FMS attacks (Fluhrer, Mantin, and Shamir) in 2001, PTW attacks (Pyshkin, Tews, and Weinmann) in 2007, and ARP requested relay attacks.Also, the router model that is in place has been reported (Tom, 2017) that it’s vulnerable for several kinds of attacks including DOS, Authentication bypass.

According to NIST standards 2016 Revision 1, (Paulsen & Toth, 2016) WEP is no longer considered as a trusted encryption protocol due to its vulnerabilities. So, NIST advised not to use WEP anymore.

The given Cisco ASA 5585-X firewall has several security vulnerabilities reported. According to theUnited States Computer Emergency Readiness Team (CISA Cyber + Infrastructure, 2016), exploitation of these vulnerabilities possible allows a remote attacker to take over the entire affected system. After the announcement, Cisco has issued several patches for several products. Since it’s stated that the firmware update date is unknown for their company’s CiscoASA 5585-X firewall it’s possible to compromise it. 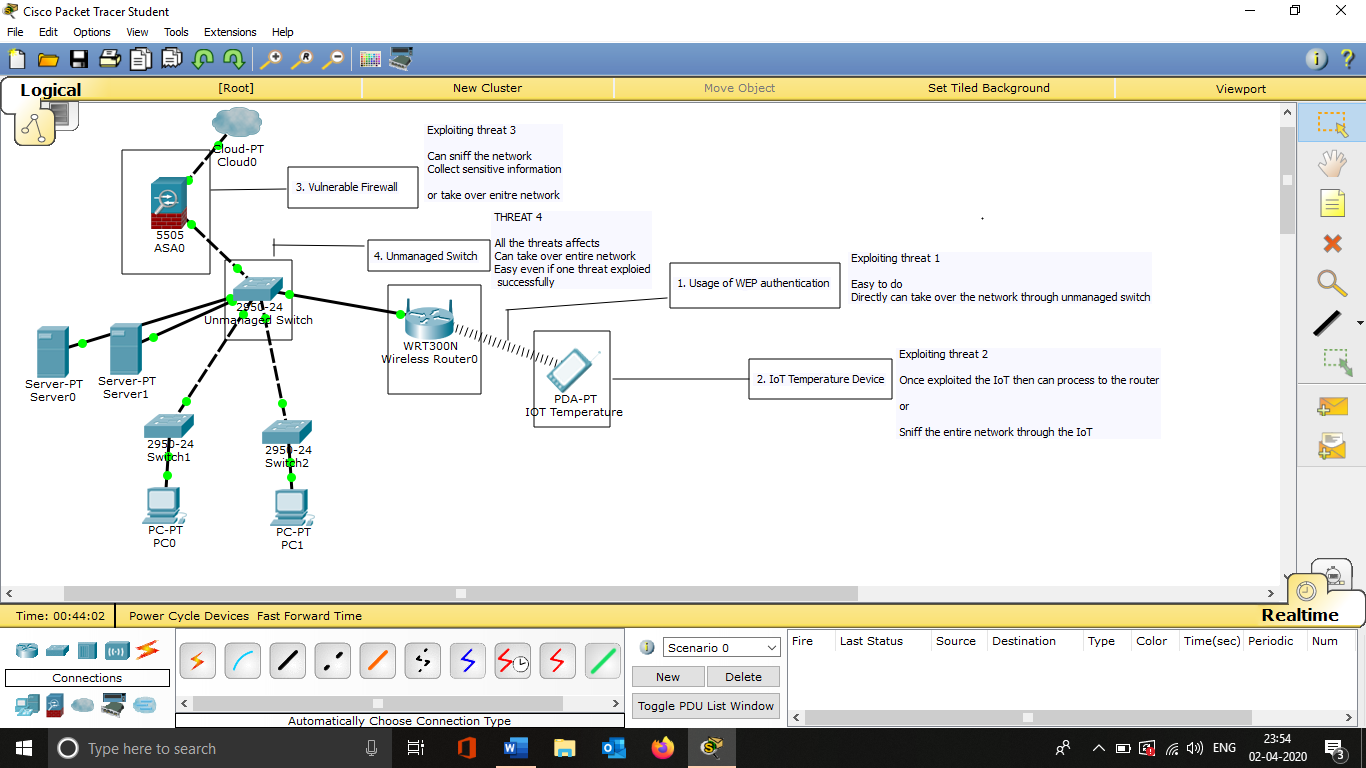 Screenshot 1 shows the attack vectors that are identified. At this point even if anyone point has been compromised it will impact the entire network. Because all the vectors are connected at a single center point which is the unmanaged switch.

An actual attack based on WEP

In 2007 TK Maxx security breach was a sensational and well-known one. This breach also is known as the world’s largest commercial security breach back in time. During this data breach, the attackers stole 45 million customer records (Espiner, 2007) which include their credit and debit card details. This data breach led TK Maxx to offer 40.9 Million USD as a settlement (Espiner, 2007) . When the analysis was done by the organizations the root cause of this data breach was using WEP. It is reported (Simon, 2007) that Tk Maxx was using WEP and attackers successfully cracked that and installed the credit harvester software on the company’s systems.

This breach clearly shows how much impact that using WEP can cause to an organization.

An attack based on IoT temperature sensor

IoT based malware campaigns are increasing day by day. A unique breach that suits for the IoT temperature sensor that is given in this case study happened in 2017. According to the Dark Trace global threat report 2017 (Dark Trace, 2017) it is stated that hackers exploited a casino’s fish tank temperature sensor to breach the security. During the data breach 10GB size of data has been transferred to out of the company’s network. The name and other details of the casino associated with this incident are not disclosed.

Apart from that specific incident, one more emerging threat that targets the IoT devices is Mirai It’s (Cloudflare, n.d.) a malware that affects the IoT devices connected through the internet and turns them into botnets that cybercriminals can utilize.  In 2016 October a massive DDoS attack made the internet not accessible on the USA east coast (Fruhlinger, 2018). Researches revealed that the DDoS attack caused due to IoT botnet i.e. Mirai. So, securing IoT devices in a network is crucial to avoid security incidents.

There are no specific real-world security incidents that happened due to this specific product but there are a huge amount of vulnerabilities that have been reported for it. According to NIST’s NVD (National Vulnerability Database) (NVD, n.d.) records, there are 56 CVE’s are published for this particular product. And the majority of these vulnerabilities allows the external attacker to perform privilege escalation and take control over it.

Same as the previous threat there is no specific real-world security incident that happened only because of an unmanaged switch. Because switches cannot be compromised directly unless other parts of the infrastructure compromised and then only it is possible to compromise the switches.

Countermeasures for the threats identified

According to NIST 800-153 (Murugiah & Karen, 2012), the following are some recommended guidelines for wireless networks that can be act as suitable counter measures,

Since IoT is emerging organizations like NIST haven’t compiled a structured standard for it. But some other government bodies around the world made some guidelines on IoT devices. The following are the guidelines made by IMDA Singapore (IMDA, 2020) that can be act as suitable counter measures,

In cybersecurity, there is no single solution for all the issues rather several protocols can be applied to reduce the security incidents. This same applies to wireless security also. Due to emerging and inevitable wireless network benefits, the threats also emerging and specifically emerging IoT technology comes with more security issues and introducing new vulnerabilities. Organizations like NIST are currently developing standard strategies to combat the threats and it’s expected that in the upcoming era the issues can be reduced.