In current scenario information warfare is growing rapidly. Information warfare consists of actions taken to take over control of the information while protecting one’s own information. The given case study explains how a Private Intelligence Company used information warfare strategies to take over control on an activist group to profit its client. Furthermore, this case study introducing the concept Corporate Espionage where a corporate/organization use improper actions against the competitor to gain commercial advantage. Besides it explains the offensive and defensive strategies applied by both the parties. Also, it explains the corporate espionage and need of threat intelligence in details.

In this scenario the British Aerospace used a private intelligence agency established by the Evelyn le Chêne for performing corporate espionage of its competitor CAAT. CAAT is just known as the Campaign against Arms Trade. Here the author analysed the spy documents and explains what can be learned from this case.

The beginning of the article discussed how the infiltrators collected the information and transfer it to BAe. Afterward it is moving to how BAe used the information to stop CAAT’s plans against them. After that it explaining what are all the defensive and offensive operations done by the infiltrates. Afterwards, it continues to explain how effectively BAe used the information against its target CAAT by stopping their plans. Then how CAAT reacted to the incident happened. After that the case study explains Evelyn’s intelligence link and the remaining unanswered question then concluded with pros and cons of corporate intelligence.

Offensive player is the one who launch an operation against the target using various strategies and tactics. Here the Aerospace of British is the one who started the information warfare operation against CAAT to acquire the information. Basically Aerospace of British is one of largest in defence contractor which is in Europe and also one of the well-known aerospace companies in globe ("British Aerospace UK", n.d.). So, British Aerospace is offensive player in this scenario.

Defensive player is the one who protect the information from the offensive player’s operations. Here the Campaign against Arms Trade was the defensive player. CAAT is basically a United Kingdom based organization which functioning to end a trade of arms around the world

The vital player in this operation without whom, the operation is not possible is Evelyn le Chêne the founder of the Threat response international which advised corporations on security threats.

Another notable person in this project is Andrian Franks son of Evelyn Le Chêne also owned a company called Risk and crisis analysis.

In this threat response case study apart from offensive and defensive player there are Non-state actors available. Non-state actors are generally has influence in politics but not connected with any particular country/state. The non-state actors played major roles in this operation. They are follows,

The primary Non-state actor here is David Connett from the Sunday times. He is the one who found this spying incident online and released in the media. Also, Sunday times known for its quality reporting and covering about British politics. ("The Sunday Times | British newspaper", n.d.)

The organization which involves here is Dutch Grass roots buro Jansen & Janssen. This Buro Jansen & Janssen is a specialist in monitoring police en secret services. The reason the organization involves in this case is it was approached by ASEED (Action for Solidarity Environment Equality and Diversity) to investigate about Andrian frank and exposed about him. (schrijft, 2004)

Government is the best example for actor role in information warfare. The reason John Major’s government listed here is because at the time of operation this government was deciding authority to grant permission to BAe ‘s Hawk contract (£500m sale of the British Aerospace to Indonesia). But at the same occasion Evelyn was performing  inside  fence actions to acquire and pass the information. 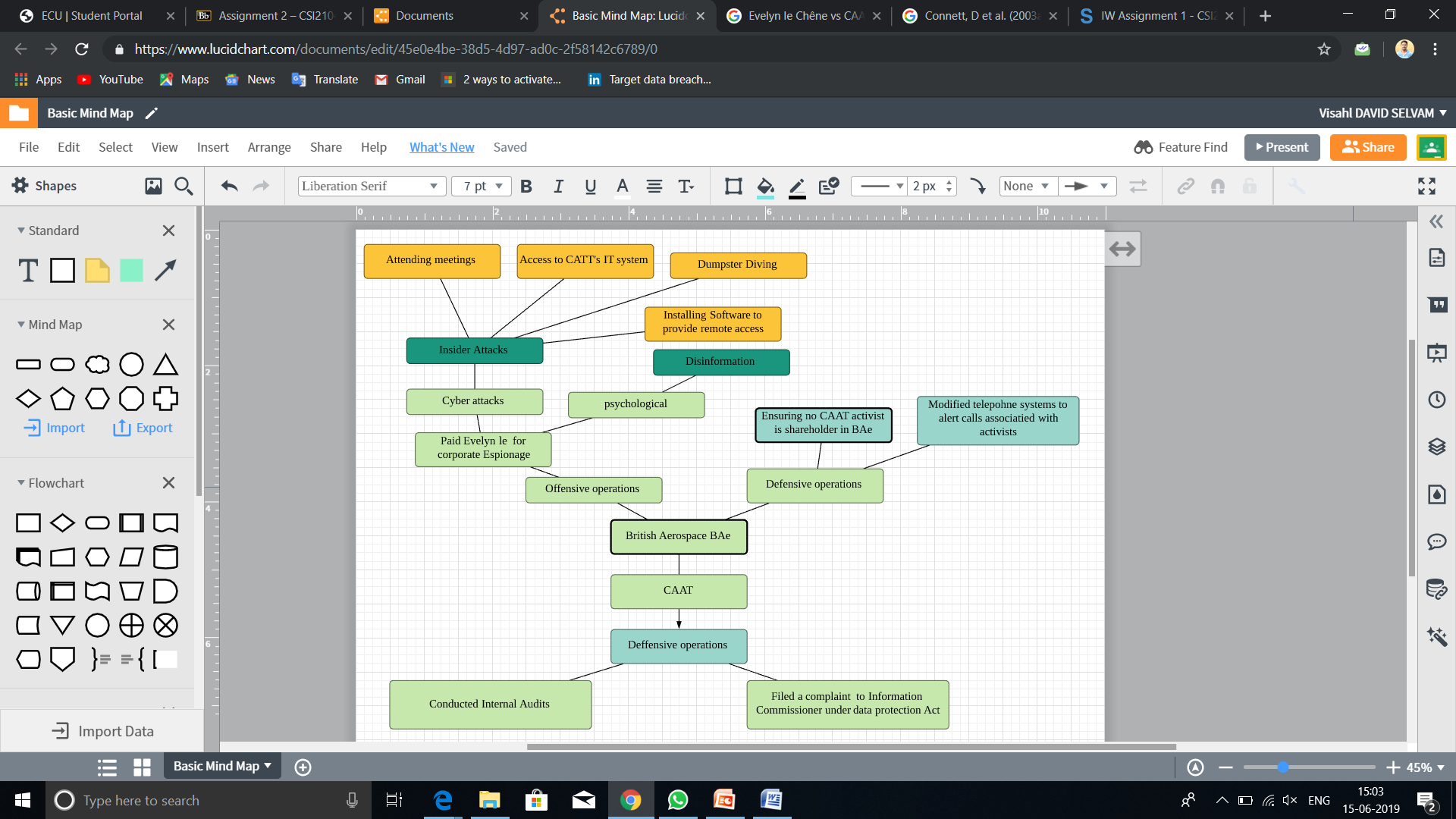 Since, CAAT had no knowledge about this corporate espionage performed by BAe on its company until the Sunday times released news about it, CAAT has nothing to do. Once, the news released in Sunday times, CAAT conducted a internal audit and found that Martin Hogbin a volunteer in CAAT had been forwarding the emails to the company with known to Evelyn and suspended Martin Hogbin from the company. ("Spying - About CAAT - Campaign Against Arms Trade", 2005) Commissioner of Information has received a case about the Martin Hogin which was filed by the CAAT. But the Commissioner of Information determined not to take the action against the Martin Hogbin since, information sent emailed by Martin doesn’t covered under 1998 Act.

So, these are the 2 defensive actions taken by CAAT in this scenario.

The primary aim of CAAT is, ("About CAAT - Campaign Against Arms Trade", n.d.) to conclude the arms trade of International Level, and where BAe is Britains largest arms dealer. Also CAAT is always a barrier to BAe’s project and deals. The best example is during the mid of 90’s CAAT is stepping up the campaign which was against the £500m sale of Aerospace of British jets to Indonesia. There are several cases where CAAT stands against BAe. So, it clearly shows that BAe performed this operation on CAAT for commercial advantage.

Also by doing this BAe can able to know the political support provided to CAAT and any new policy implication that can affect BAe’s Indonesia deal Furthermore, So, this operation can also intended for political purposes also.

As the case study explains, the primary motive of the operation is to get information about CAAT in order to gain commercial advantage and as well as political. Here, the operation was started with Evelyn le Chee who infiltrated the CAAT’s organization with her agents. The way she and her agents followed to acquire the information includes attending internal meetings, taking control over the CAAT’s IT system, installing new computer system in CAAT’s office and members homes. Reading diaries and bank statements, following CAAT’s activists,

Once, they gather all the details they have faxed them in encrypted format to BAe’s office. Later on BAe installed software on Evelyn’s computer to access the details whenever required.

By using the information gathered by Evelyn BAe stopped the several plans planned by CAAT. The plans includes 'incursion' of a BAe plant by CAAT activists. Apart from this there are several Larger protests were also managed by BAe.

By analyzing this case study we come to know. Furthermore this case study briefs the protections required in today’s corporate world such as counter intelligence and intelligence gathering. Implementing these counter measures can protect the organizations from these issues.