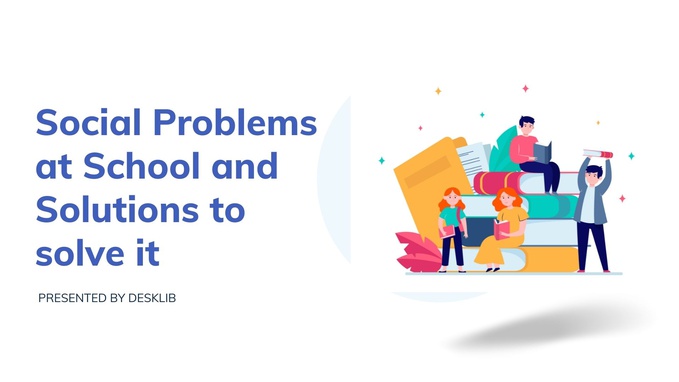 Social Problems at Schools and Effective Solutions to deal with it

Today when we have left school, we all miss and remember those days as cherished memories; it was fun for most of us. However, there are some troublesome things which we all had faced, such as fear of homework or an angry teacher. Some have an issue in making friends; others have trouble juggling from one person to other. We all have our issues as students; however, many kids have to face the social problems present in the school.

What is a Social Problem?

This term is usually used for the condition of the society, which leads to damaging and constructing a negative society, its incudes crimes, racism, harmful social beliefs, such as female feticide, LGBTIQ racism, etc.

We faced certain issues in school that we didn't recognize to be a social problem and didn't care enough to be affected by it, but some of us were deeply impacted. Not having friends to share lunch with, getting bullied by elder kids while going to school, or is a lunch break. Most females have faced that awkward situation in school with a stain on their clothes and feeling ashamed and scared of menstruation. These social problems can impact a student deeply, and mostly it goes unidentified by the teachers, classmates, and even parents.

Traits of an Unhappy Child

The first step that can help save kids who are the victims of a social problem is identifying their traits.

The various social problems faced by students in school are as follows:

The most common social problem found in schools is the difference in financial status between kids. Even with similar uniforms, a similar level of attention, and education, kids are impacted if their social status varies from their classmates. School events, after-school playdates, and birthdays are a struggle for these kids, as, at these events, they feel obliged to showcase their status similar to their friends. Those kids who cannot pretend to end up losing friends and confidence result in mental trauma for life.

We all have seniors or juniors who dropped out, and at that point, it sounded so cool, like "oh nice, now he will never have to study or sit during a boring class, and will end up being a millionaire, pop star, or a movie star". So, have all of those ended up being who they admired to be. The answer is no; it's not demotivating by saying that dreams don't come true, but dropping out of school to achieve that can never lead to those dreams. Most of the kids get influenced by getting inspired from dropout success stories and then end up being troublesome adults.

In 2020, approximately 12 million girls of age group 15-19 got pregnant, and among those, 777,000 under the age group of 15 gave birth around all the developing countries. The statistics of underdeveloped and developed countries are also high. Teen pregnancy is the most dreadful social problem of every parent who sends their girls to school. The girls who get pregnant face the most trauma and health conditions resulting in leaving their education and being young mothers of their children. Pregnancy can be sexual abuse unsafe sex, but this cause is very much an issue.

Even when most countries have strict laws against ragging and bullying, it is as present in school as earlier. Some kids bully other kids not to be the victim of this cycle, and others are due to the psychological trauma they face somewhere else. However, the victim of this cycle gets affected by it so much that it impacts their physical and mental health, leading to negative outcomes.

One of the outcomes of social problems always leads to another problem which is suicide. Students get so frustrated with everything going around them that they find the easiest way to disappear or die. Children suffering from social troubles might often attempt suicide. However, this issue affects not only that single person, but it eventually affects every child within the school, especially those in contact with the kid who passed away.

The diversity in schools, as much as it helps towards the growth of the society, impacts more on the children from the diverse class. Such as, black kids or kids from different cultures and backgrounds often feel left out and different from the other kids, which extracts negative feelings in a kid.

Being overweight is already hard, as doctors and parents want them to be fit and healthy, which is upsetting for a kid. However, on top of that, getting called out by names such as 'fatso' 'fatty' is another social problem that impacts a body-shaming and conscious mindset that becomes a start for another social problem.

How to Effectively Solve Social Problems at School?

The following effective solutions can be taken To curb this social situation at school:

1. Analyzing the situation - Teachers and counsellors at school should identify the major issue that a kid might be feeling. Kids that do not seem unhappy or in trouble have an issue that might be driving them to the edge, which is self-harm. So, the guardians and teachers should analyze the situation carefully and determine how and what should be done to resolve it.

4.    Have group and one-on-one conversations - If school authorities are aware of any ongoing social problem at school or if they suspect the weird behaviour of students. They should apply one on one meetings and group conversations, whichever works. This can work because children might open up and talk about the issue of their friends who are in trouble, but if they try to hide it, their actions and reactions can indicate some hint about the problems.

5.    Providing specific training and opportunities - Specific training such as dealing with stress, yoga and meditation classes, sex education classes, and dealing with bullies. Teachers can also provide authority such as class representatives, guiding or monitoring students who face discrimination and bullying can help. However, keeping an eye on these kids is necessary because as much as it can reserve the situation, it can also worsen it in some cases.

Role of Students, Teachers, and Parents in Solving Social Problems at School

Teachers are the sole individuals who can reach and monitor every student's behaviour in a school environment. Besides providing education, they are also responsible for taking care of these kids and providing them with knowledge of right and wrong.

Students in that problem need to communicate the situation with an adult. Students who want to help others at school can encourage social problems education and volunteer for such causes. They can also report the crime attempted by other students who might be behind those problems.

Parents and families, who discover a sudden change in their kid, should try to communicate and identify the reason behind that change. Parents can also get more involved in their kids' life and ask them about their day, ensuring safety and trust. If they identify any negative thing, they should contact the school authority, or even teach their kids how to deal with such problems.

Every kid is beautiful and has to face their fight. They face as many issues as a grown-up adult; their issues should be acknowledged and solved before it is too late for them to resolve the problem.

Education teaches a person about right and wrong; it also evolves a person to become responsible and understand their role within society. A better-educated person is aware of their rights and reacts accordingly to the social problem. Also, education provides confidence that lets a person fight and even realize their mistake when causing a social problem to others.

Q3- What is the impact of the social problem on students?

When a child faces a social problem, some react defensively, try to engage in bad company, and do negative things to not end up as a victim. Others who are the victim suffer from severe illnesses such as depression and anxiety and sometimes harm themselves. Kids who don't harm themselves are dysfunctional adults who are trouble for others.