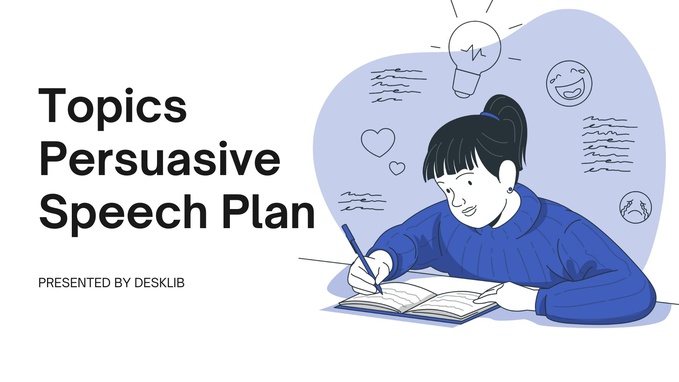 One may encounter a variety of situations throughout one’s academic career to deliver persuasive speeches. Writing and delivering a persuasive speech can turn into a nightmare if not paid meticulous attention to it. Choosing the correct topic is probably harder. Therefore, in this blog, we will discuss what is a persuasive speech, how to select the right topic and its component and finally one detailed example of persuasive speech.

What is Persuasive Speech?

According to Cambridge English Dictionary, a persuasive word mean “making you want to do or believe a particular thing”. So, in layman’s terms, Persuasive Speech can be defined as a method intended to persuade the audience to believe in a particular point of view. With the help of persuasive speech one chare share, inform, convince, motivate, and educate the audience.
Undoubtedly, apart from academics, a student will encounter various instances, where they will apply the power of persuasive speech in real life. For example: in job interviews, during work.

How to select Persuasive Speech Topic?

What to do after selecting a Persuasive topic?

Research, Research and Research! That’s exactly what you need to do after finalizing the topic. After that follow the below points-

Bonus Tip: Make sure your persuasive speech follow sequential and logical order for your audience to adapt to the viewpoint. And don’t forget Practice makes a man perfect hence, before the final delivery of speech practice thoroughly so that you build confidence.

"Click here to learn the next topic Persuasive Speech On Parents"

According to the US Census Bureau, women construction workers are paid 17 per cent less than their male counterparts (Scott, Boggess & Timm, 2018). Why is this racial discrimination in the workplace occurring? Findings of the Institute for Women’s Policy Research indicate that the plight of women workers is not that bad. Women are 95.2 per cent in dollars compared to their male co-workers. In UAE, it has been found that women construction workers earn 79 per cent of what the men earn (Toor, Suresh & Renukappa, 2017). It has been found that worldwide the pay scale of construction workers is higher for men than that of women.

Scholars working on occupational studies and gender studies have found that the wage of the person is dependent on their position in the matrix. There is a belief that women are not as competent as men and therefore, their productivity is low as compared to men. The culture of patriarchy and andro-centric attitude influences the employers to pay female construction workers lesser than male construction workers. It has further been found that labeling and exclusionary policies of letting women work in demanding conditions, exclude them from the high-paying tasks in the construction job and therefore women are pushed to the brink of the economy.

Examples of this would be a 10 per cent increase in the proportion of female construction workers in UAE is associated with a fall in 5 per cent of the wages. Another example of this is the estimate found by ILO that the gender gap is 20 to 40 per cent.
While thinking about an unforgettable moment of triumph the first thing that cropped up in my mind is the date 15th December 2016. It was not only an unforgettable moment but the incident had also taught me a life lesson. Before the incident had taken place I was totally a different person with a different belief. But after this particular day, I really had a strong belief in a positive mentality and hard work. For this persuasive essay on appeal for the rights of the female construction workers, the theses statement is- positivism and effort are directly proportional to the final victory.

I have never believed in hard work or effort and thought these were mere terms and all of us are guided by luck ("Stanford Magazine - Article", 2007). The reason behind growing this notion is that since my childhood I have always seen people just relaxing and getting all the pleasure whereas others who indulged themselves in hard work did not get the necessary outcome (Frank, 2016). I used to keep brooding that why the universe is so wrong in judging people. If a person is working hard then he has all the right to enjoy a good result but as it is said, ‘man proposes, god disposes’, the worthless ones always taste the fruit of success.

When I was in class 4, I had a friend who worked very hard to come first in class. He used to study day and night even during lunchtime when others were busy playing he was busy with textbooks. But nothing changed during the assessments as he could never make it in the top five students of the class. On the contrary, a spoilt and rich boy who had a foul nature did not have a polite nature, most disobedient and the prankster of the class always managed to grab the first position in the class. The reason might be the preference of the teacher where the beam balance tilted more on the side of the rich boy. “Gender and grade differences emerged” (Ahn, Rodkin & Gest, 2013). Since then I have developed the notion that maybe there is no value of real effort in this universe.

“…because family is what I care the most about”. In the course of growing up, I found the same thing happening in my personal life too. I am a family-oriented person. As much as I love my parents, I have equal respect for my other family members too (Covey, 2014). “Every family situation is unique and different.” My uncle used to work in the plumbing industry and he was one of the most dedicated employees of the organization. You might think that I am taking the side of my family member. But that is not so as I am being totally genuine while sharing my experience and proving the theses statement. I think of him as a role model and always wanted to be like him when I grow up. He used to keep himself deep delved in work so that there is no scope of complaint from his supervisors. The dedication and commitment that he had toward his work are absolutely remarkable. He did not even waste time talking while working with the risk of getting mistaken. With the description that I have provided till now, you might have got an idea about my uncle. But can you believe that such a loyal and honest person can be terminated from the company on the ground of violating rules? Yes, that was the outcome of my uncle after serving the company for twenty tedious years. This was the last thing that I had expected from him but later got to know that he was falsely accused.

These two incidents in my life broke my positive hopes and pushed me towards a dark world. The minimum amount of confidence that was present within me got shattered into pieces. When the crucial time came for my placement I was almost assured that I will also have to face such a drastic experience. But my parents and professors tried their best to motivate me for my upcoming days. My parents always found new ways to cheer me up such as taking me out for movies or dinner. But I was not being able to come out of the shocking instances of my two near and dear ones. With a little ray of hope and little positivism that I had, I went in for the interview for the recruitment and selection process that is considered as one of the top MNC. The date was 29th March 2016 when I tiptoed into the room of the HR loaded with necessary preparation with my heart beating at the fastest possible pace. My heart was beating so fast that I felt the HR might also be able to listen to the ‘club- DUB’ rhythm. Well, the interview went as I expected an interesting yet tricky one. After the interview, I was told that the results will be informed to me via mail.

Exactly after one month that is on 29th April 2016, I saw my mailbox shining with the glorious mail from the specific company asking me to join from 5th May 2016. My joy knew no bound after receiving the mail as it was the most wanted thing in my life then. On one hand, I was totally devastated because of my prior experience, and on the other hand, I was finding out that most of my friends are getting into popular companies. I was standing in the junction of crucial situations. When the ship of life was trying to withstand the severe storm in the ocean, right at that moment the miracle happened. I came floating safely on the seashore. My parents were terribly happy more for me than my job. This is because they were so worried about my condition that my getting better was more to me than getting the good news of a job.

Now you are travelling in the world of thought that why did I mention the date 15th December 2016, when my opportunity knocked on my door on 29th April 2016. The mystery will reveal at the climax of my story. So, my new life began on 5th May 2016 when I could call myself an employee of a top MNC of the world. I started learning and did my work accordingly. I was glad to find out many smiling faces around me who were always at their feet to help me in any situation. Their repercussion allowed me to work with diligence in my specific field and I was almost on the verge of getting away from my previous depression.

I started having more interaction with my colleagues and supervisors who appreciated me for my quick learning ability and always finding happiness in whatever work I do. Time passed in this way and I got accustomed to my work environment. Finally, in the 1st week of December, there was a buzzing around the office about appraisals. I was excited similar to other employees until 15th December. It was D- day of my life as I got promoted to the position of team supervisor where I will have to manage a team of 40 by portraying leadership skills.  After all these years since my childhood and all the sour experiences of my previous life, I could ultimately taste the fruit of success as a result of effort and positivity towards work. So, this is all about the part of my persuasive speech and the success story of my life.

Scott, J., Boggess, B., & Timm, E. (2018). Ensuring the Right to Rest: City Ordinances and Access to Rest Breaks for Workers in the Construction Industry. Journal of occupational and environmental medicine, 60(4), 331-336.

Hello my loved one! I want to say that this article is amazing, great written and include almost all significant infos. I would like to peer extra posts like this.

Plex.tv/link gives you one place to find and access all the media that matters to you. From personal media on your own server, to free and on-demand Movies & Shows, live TV, podcasts, and web shows, to streaming music, you can enjoy it all in one app, on any device. plex.tv/link code plex.tv/link http //plex.tv/link