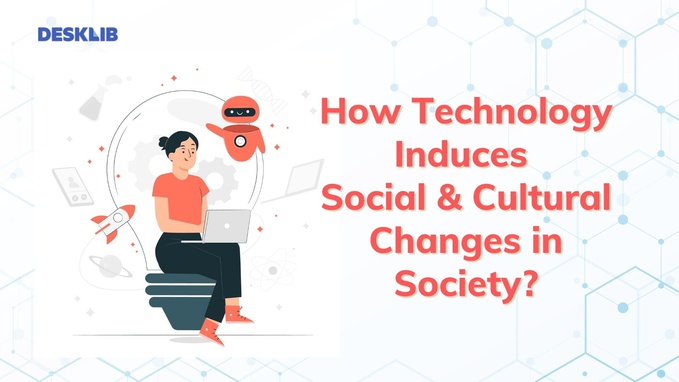 Impact of Technology On Society

Have you ever been a victim of cybercrime, such as hacking, e-mail threat, Credit card fraud? If yes, then you are aware of How dangerous technology can be. If not, then you are blessed. A pop-up e-mail that says "congrats! you have won a lottery of 1 million" can be a cyber fraud. All these frauds are due to the excessive use of technology.

From my life, I learned that excessiveness and dependency on things could be harmful, as everything needs moderation. However, the world is dependent on the excessive use of technology, leading to a drastic change in our culture, communication, thinking style, and values. People forget that even though technology is making our life faster and better, its excessive use can impact their health, lifestyle, culture, and relationships.

However, technology alone is not responsible for these issues; society is equally guilty.

A Society is a group or community of people who share a common human relationship with similar traditions, interests, and institutions. This group of people shares a common economy, government, rules, and region which connects them. The social connection between these people is ensured with their participation in everything with a common purpose or separate different purposes.

Applying the scientific knowledge to use it in everyday life of humans. Technology often confuses people about its origin, gauging it as complex and connected with electricity or a scientific concept. However, technology is merely the specific use of the equipment and applying it for making things innovative and easier, such as using little chips RAM and negating the whole CPU system into a sleek laptop. Also, a transformation of MP3 to music in smartphones, and even a chip installed in our ears, is technology.

Positive and Negative Impacts of Technology on Society

Impact of Technology on Different Segments of Society

The world has become a tech society. I don't know anyone who does not access any tech device unless that person is a monk, and children are the most rapid users of technology. The pandemic has even increased the use of technology with online classes, online examinations, and the whole education system being dependent on technology. We might say that the education system needs to use technology; the current globalized world requires the upcoming generation to be comfortable with technology to ensure growth and success in the future.

So, the education of children has to be technical and advanced. Moreover, the world can acknowledge the advantage that technology brings into education, with online lectures, extra advanced curriculum, communication, access to the best education from anywhere in the world, personalized learning methods, etc. However, a face-to-face environment was beneficial for a kid to react and understand things more practically while learning to cope with the world around them. Still, with the increasing technology, face-to-faceeducation might become extinct.

The revolution of technology had presented the industrial sector to be blessed in all aspects, with better and advanced digital technology that can improve their production and design of the produced goods. Technology has provided growth to the industrial sector with better flexibility and enhanced performance as the interconnection of tasks becomes self-regulated with technology that prevents the wastage of time (Also, learn the importance of punctuality) and leads to increased productivity which reduces the cost of unsold items and leads to improved productivity of machines, as well as human power. Technology also improves intercommunication, reduces miscommunication confusion, and leads to proper delegation and completion of a task, which is beneficial for this sector.

The impact of technology on the medical sector cannot be identified as a give or a threat, as technology is a reason behind the increase in certain diseases. It is also a reason behind finding a cure for many of them. With technology, the medical sector can access the inner partials of a human body and find a cure for them. At the time of organ damage, there is technology to remove and replace that organ. If a person's heart fails, there is technology to treat it as well. Diseases such as cancer, COVID, tuberculosis, malaria, heart diseases, lung diseases, everything are cured and treated with the help of technology.

Technology was created as a means for us to grow and explore the extent of this world. However, its negative use by us is leading to destruction. Also, these frauds are not something technology is planning to use; technology is becoming a medium for an already existing criminal in our society to attempt these crimes. If we cannot identify every mischief mind from society, we cannot remove the technology due to its excessive gifts. One thing which we can do is use it in moderation.

Q1- How technology has changed the world?

Answer-With innovative technology and its rapidly increasing change, the world is becoming smarter and better. Technology has improved our standard of living while building faster and easier lifestyles. Technology has also contributed to providing employment and improving the world's economy with globalization; these changes have transformed our world.

Q2- Does technology affects the social behaviour of people?

Answer- Yes, as much as we deny technology has impacted our social behaviour, while gadgets and technological devices have taken over our attention, we interact less in our social environment. People are becoming more introverted and choosing gadgets over meeting new people; we use phone calls as a decoy to avoid social gatherings, making us anti-social.

Q3- How does technology impacts marriage, family, and friendship?

Answer- Earlier, when there was limited access to technology or even before there was no technology, people used to go to work to finish their work. When they returned home, their priority was family, friends, and spouse. With the increased use of technology, people take their work home and forget their family time. Leading to increasing stress and tension between husband and wife, alienated affection, conflicts, dissatisfaction, and children feeling abandoned. It also changed our way of enjoying life, as earlier we used to have fun by playing poker or having a party with friends, but now watching a movie or playing a game is fun. This change impacts our mental health and affects our relationships and bonds.