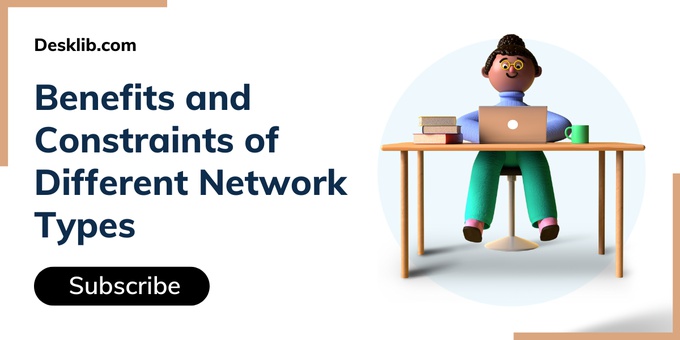 The networking industry refers to practically every type of design as an area network for historical reasons. Area networks were originally divided into two categories: LAN and WAN, with the others emerging over time as technology progressed.

These network types should not be confused with network topologies like bus, ring, or star. Following are some types of Networking systems -

A local area network (LAN) links network devices across a small distance. A single LAN is normally found in a networked office building, school, or home, though often a single building will have numerous small LANs (possibly one per room), and rarely a LAN will span a group of surrounding buildings. A LAN is typically, but not always, implemented as a single IP subnet in TCP/IP networking.

Aside from operating in a constrained space, LANs are often owned, controlled, and managed by a single entity.

A WAN, as the name implies, connects multiple locations across a long distance. Wide-area network is also considered as world’s largest internet network.

A WAN is a collection of LANs that are geographically scattered. A router is a network device that connects local area networks (LANs) to a wide area network (WAN). The router in IP networking has two addresses: a LAN address and a WAN address.

A WAN is different from LAN in various aspects. Most WANs (like the Internet) are managed and controlled collectively rather than by a single business. For long-distance connectivity, WANs often use ATM Frame Relay and X.25 technologies.

Residences typically have one LAN and link to the Internet WAN via a broadband modem from an Internet Service Provider (ISP). The modem receives a WAN IP address from the ISP, whereas all of the machines on the home network have LAN (or "private") IP addresses. All computers on the home LAN can interact directly with one another, but to reach the ISP, they must pass via a central gateway, usually a broadband router.

While LAN and WAN are by far the most usually discussed network types, you may also come across references to the following:

What are Network Operating Systems?

Network Operating Systems run on a server and let you manage data, users, groups, security, applications, and other networking activities. Over a small private network, these operating systems offer shared access to files, printers, security, programmes, and other networking services. Another important feature of Network Operating Systems is that all users are aware of the basic setup, as well as the identities of all other network users, their connections, and so on, which is why these machines are referred to as tightly connected systems.

A computer network's main benefit is that it allows for file sharing and remote file access. If a person is authorized to do so, a person sitting at one workstation linked to a network can readily examine files on another workstation. This eliminates the need for him to carry a storage device every time data needs to be transferred between systems. Furthermore, a central database allows everyone on the network to access and/or update a file. When files are kept on a server and all of the server's clients share that storage space, making a file available to multiple users becomes easier.

A computer network's benefit of resource sharing is also significant. If a company has twelve employees, each with a computer, they'll need twelve modems and twelve printers to share resources. By allowing resource sharing, a computer network, on the other hand, offers a less expensive option. A network may connect all of the computers, and a single modem and printer can serve all twelve users efficiently.

Hardware expenditures are reduced when resources are shared. Shared files reduce the amount of memory required, which reduces file storage costs indirectly. A piece of software can only be installed once on the server and then made available to all linked machines at the same time. This eliminates the cost of purchasing and installing the same program several times for multiple users.

One of the most significant disadvantages of computer networks is the security concerns they raise. Physical access is required for any type of data theft if a computer is a stand-alone computer. If a computer is connected to a network, however, a hacker can gain unauthorised access by employing a variety of tools. Various network security software must be utilised in the case of large enterprises to prevent the theft of any secret or classified data.

If one computer on a network is infected with a virus, the other computers on the network may also be at risk. Because of the interconnectedness of workstations, viruses can readily spread across a network. Similarly, if malware is unintentionally installed on the central server, it will harm all clients in the network who are connected to that server.

Operating and administering a computer network necessitates a significant amount of technical knowledge and expertise. This is work that cannot be done by a user with only the most basic skills. Also, because the network administrator is responsible for assigning usernames, passwords, and rights to users on the network, the job comes with a lot of responsibility.

Although, there are variousbenefits and constraints of Different Network Types these can be managed according to one’s needs.

Definition and Dimension of CNSS Model