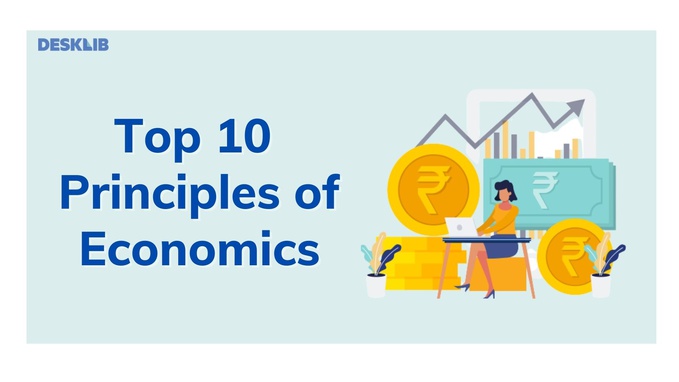 In this way, we all are economists, where we are just trying to gather all the necessary resources and allocate them to their proper place. A student gathers their course material and uses it to pass their exams. A businessman gathers raw materials, products, and capital for-profit and a better standard of living. A house person is the most excellent economist anyone can know.

So, if we all need economics in life, let's understand this concept and learn its principles for better application, leading to its growth.

In the 8th century, a Greek farmer wrote that efficient use of labour material and time is required to overcome the issue of scarcity, which gave born to the subject of economics.

Economics is a concept of social science; it determines every action of production, consumption, production, and distribution of goods in the market. There are various studies of economics, that not only consider the choices of businesses and government decisions, but it also is dependent on the choices made by all individuals at the time of using resources and their rational behaviour, which can affect the trade, labour market, etc.

Economics study can be divided into two forms of economic parts which one is the study of the economy's behaviour as whole called macroeconomics, including national income. The second is concentrated on the behaviour of individuals and businesses, called microeconomics.

Economics is mostly the identification of some basic economics standards such as demand, supply, cost, benefits, scarcity, and incentives of goods.

Principles that affect the decision making power of people

We humans have to take various decisions in life, almost all of the aspects where we need to decide to provide us two options where one option needs to be trade-off by the other.

This trade-off is human nature, making choose one option above the other. You can see this trade-off in the allocation of budget by the government to benefit all the citizens. Still, sometimes it chooses the lower category and provides them more benefits to maintain equality in society. Also, how a student spends their time provides the hard subject more time than the easy one.

2. What you give to get something is the cost of something

When people are outing between options to choose from, they are also required to compare both options based on their cost. For example, if you have the option of choosing between buying a loaf of bread or an egg, you will compare the cost of both products and how much amount you have.

The second principle of economics considers that there is always a cost of something you want, which needs to be exchanged to get that item you want. Everything you want and give is not compared in terms of monetary cost. Sometimes there are other things you give in exchange for one commodity.

Such as, if you want to grow vegetables at home, as it is organic and cheaper, you also need to consider the time and care it will require to grow them.

3. Rationale people think everything with a margin

It is assumed that people think rationally; they decide when there is a margin or edge to the action plan. A person's decision is taken with extra care, and selecting the decision depends on its extra cost and benefits. When consumers purchase a product, they look for maximum satisfaction; their rational thinking can influence their decision and willingness to pay for that product.

For example, when you have two buying options, one is preparing for the exams with the common course material, and another is reading the extra material for better results in the exam. Then your rational thinking will compare the marginal benefits of reading the extra material and the cost of time that you have to pay. It determines your decision and leads towards the maximum satisfaction of what you decide.

As I have explained in the above three principles, a person's choices depend on comparing and satisfying the product.

However, another option plays a specific role in dominating the behaviour of individuals, which is an incentive. When you get an extra reward with something, your purchasing behaviour will change. The incentive can be both positive and negative such as when you get an extra free commodity with the things you are purchasing, that bonus will encourage you to buy or accept that thing.

But if that incentive is negative, such as increased taxes or increased fuel rate, it can negatively impact.

Principles which are depended on the interaction of people

5. Trade makes everyone better off

Tarde is a positive aspect; when there is trade between two parties, there is no one side which wine, both the sides can be on the winning side.

Trade is focused on encouraging the benefit of both parties. For example, there is a trading system between countries, as one country cannot have all the resources, so they get other necessary resources to form other countries, which is their trade system.

It is beneficial for both countries to fulfil the requirement of other resources in their country and get even cheaper resources and increased trade facilities globally. For example, Russia is the primary and leading manufacturer of nuclear weapons and other armed weapons.

So, trading for other resources and giving their nuclear weapons will make their country grow and help maintain equality of nuclear power in the world.

6. Economic activity is better organized in a market

If this system is disrupted government can step up and build policies for both households and firms; however, households and firms always have an invisible hand in building an economic policy. The market economy system also impacts the prices of goods and services and the overall welfare of society.

7. The government can improve market outcomes

Even though economic policy can be created by our invisible hand, we require the government to help protect and manage those policies and our economic system. The market economy can only succeed if all the rights are properly organized in our economic system and promoted efficiently, with equality. Suppose the government does not enter to improve the system and allocate all the resources to every individual successfully.

The market condition will fail deliberately with increased scarcity of resources and negatively impact the environment. For example, if the government does not improve environmental issues like increased pollution and global warming, their interventions can worsen, such as reducing plastic and recycling solutions.

8. The standard of living of a country's population depends upon the country's production

For example, you can see that all the developing countries or the underdeveloped countries have lower incomes which impact their standard of living and lower their growth. With the decreased production of goods and services, the workers get less income which negatively impacts their standard of living, eventually lowering their access to education technology and a better lifestyle.

9. Too much printing of money by the government can increase the prices of products

The monetary flow is dependent not only on the country's banking system but also on our government's duty to evaluate the flow of money in our country.

When the government prints more money than required for the market, it increases leading to an increase in the inflation rate. The higher the cost of goods, the more rate will increase. Government should increase that it needs to evaluate the market and the circulation of money before incorporating more monetary notes.

10. There is a short-run trade-off between unemployment and inflation

Economist has always found a correlation between unemployment and inflation. These two can impact both the circulating flow of an economy and the standard of living in the country.

The price cycle, which is impacted by an increased print of money leading to inflation, is also impactful on the employment state of the country. For example, increased inflation in a country will lead to businesses not having enough money to pay their employee, eventually leading to recession and unemployment.

An economy can be highly influenced by these principles and disturb the rate of goods and services, labour market, government policies, and other essential aspects that will eventually impact your day-to-day life.

Learning about economics and its principle can make you more aware of analyzing the future situation and secure your and the country's future. However, to learn more and grow as an economist, you should take a degree course in the economy.

Q1- What is the importance of economics in our daily life?

We might think that we are not government economists, so why should we be concerned with this subject?

In reality, every aspect of economics affects our day-to-day life, from buying groceries or oil to the bigger decision such as interest rates, taxes, saving accounts etc. Our lives are influenced by our every decision of consumption, saving, working, and it is impacted vastly by an issue such as economic loss or growth, inflation etc.

Q2- What is the most important principle of economics?

Every principle of economics is essential as the four key concepts are covered in those principles: supply and demand, scarcity, cost and benefits, and incentives.

Q3- Who wrote the principles of economics?

Alfred Marshall is the author of economic principles. He was a member of the royal commission of labour. His principle of economics was the most meaningful contribution to the literature on economics.