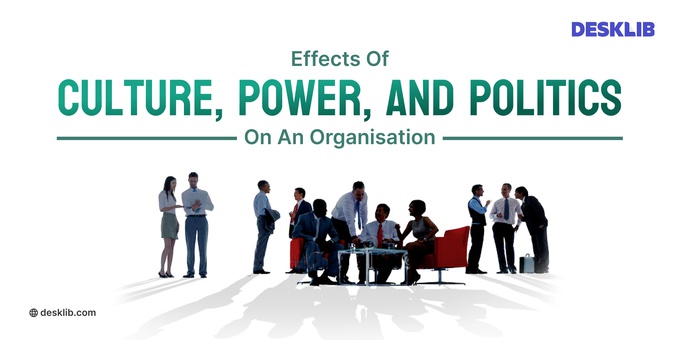 In the corporate culture, we all have witnessed through various past records that, people have struggled to strike a balance between politics, power, and culture.

To defend what they believe in, many people have gone to great lengths, including fighting countless battles and risking their lives.

In this blog, we will talk about the Effects of Culture on Different Organizations. Politics, power, and cultural influences have seeped into the workplace. People today worry about far more than merely finishing their allotted tasks in the workplace.

Day-to-day operations within the organization are governed by organizational culture, power dynamics, and office politics. The influence that politics and power have at work directly reflects the official and informal cultures of the company.

A healthy organizational behavior culture gives the business and its workers direction and stability. Employee attitudes and behaviors, performance, and turnover rates can all be impacted by an organization's culture.

8 points on how factors like power, culture, and politics affect an organization’s environment?

People usually have a powerful basis in organizations. Simply put, businesses exist to satisfy market demands in order to generate a surplus of revenue over expenses.

Organizations, however, are also political structures that offer people the chance to advance their careers and, as a result, offer venues for the expression of personal interests and goals.

In order to translate personal interests into actions that have an impact on other people, power must be accumulated. This is especially true at the top managerial and professional levels.

In a system of scarcity, where people vie for power, a political pyramid develops. In other words, people cannot just ask for the power they desire. Instead, individuals must participate in decisions about how to allocate authority within a specific formal organizational structure.

There are two groups of circumstances that lead to electricity shortages:

In either of the above cases, comparison and the feeling of scarcity takes over.

Power and Politics in Organizational Behavior develop from the presence of constituents in addition to the conditions of scarcity and competitiveness.

A superior may be happy with changes in the distribution of resources and, as a result, power, but he represents subordinates who, for various reasons, may not be.

These subordinates commend and assist their superiors. They can also stop giving superior affirmation and support, which would isolate them and have all the painful effects that come with it.

The constant urge to exert one's power is another element that intensifies the struggle for power that is a hallmark of all political organizations. In a power dynamic, usually, companies have an implicit banking system.

Three components make up an individual's initial "capitalization," which forms their power base:

This capitalization of power represents the overall respect that people have for the person. The mechanism by which the person internalizes all of the sources of power capital is still not entirely known, but it is similar to how he builds self-esteem.

The person is aware of his influence, evaluates it realistically, and is prepared to jeopardize his self-respect in order to sway others.

On the one hand, joint effort and dedication to shared goals are required by organizations. Contrarily, conflicts of interest do exist among individuals who ultimately share a shared fate and are expected to cooperate, as evidenced by experience in organizations.

The paramount significance of conflicts of interest is what transforms a business into something more political and less ideological and rationalistic.

Contradictions abound in organizational life inside a political framework. Although it is a rational exercise, the power figures' beliefs, whose contents and origins are only vaguely understood, are what give it its energy.

It deals with the sources of power and how they are distributed, but it firstly depends on the presence of a balance of power held by a person who takes initiative and produces results.

It involves several rituals, including participation, democracy, and power-sharing, but the end result is the concentration of power around a single individual to whom other people develop strong emotional bonds.

Key executives establish a coalition within the authority of the official organizational structure. Different coalitions have different shapes, and these forms also have different psychological implications.

However, without a consolidation of power in the connection between a leading character and his chosen group, no organization can function. The coalition between the chief executive and his direct reports or personnel is not required.

It may actually skip the second level, as is the case with American presidents who rely on members of the executive staff or particular persons outside the formal structure rather than forging strong bonds with their cabinet members.

Groups and individuals alike encounter stressful situations that cause defenses to be mobilized. It is not surprising that coalitions adopt defensive strategies when stress levels are beyond what is normally tolerable.

However, a more significant issue arises when the primary factor holding men together in a structure is the desire to protect against or act out the conflicts that individuals cannot endure on their own.

Collusions indicate the prevalence of unconscious conflict and protective behavior, whereas coalitions represent the aggregation of power with the conscious intention of leveraging the abilities of members for constructive ends.

The existence of collisions and their causes frequently become the impasse in organizational life that must be resolved before any changes can be made.

In order to complete this blog, we can come to the conclusion that; the fundamental lesson that people in positions of power differ from "regular" people primarily in their ability to force their personal defenses onto the stage of corporate life.

One should not lose sight of this. Fortunately, the relationships can be managed intelligently, and the point of this article's conclusion is to discuss the nature of this wisdom.

How to Evaluate a Business Based on Revenue