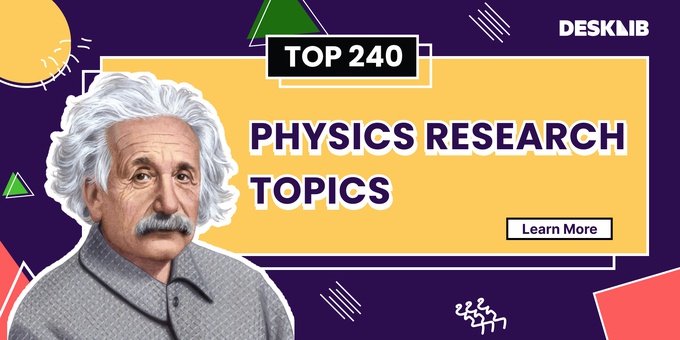 But with us, you can make the journey of writing a research paper on physics easier.

Here we are, to solve the most difficult problem of selecting/choosing the topic for writing a research paper. The research topic should be selected concerning the most important factor which is the availability of resources on that very topic. If you select a topic for writing a research paper on it, then kindly check if appropriate sources on it are available in the market or not.

Second, the topic should be chosen out of interest, as writing a research paper, especially on physics is going to be exasperating and a prolonged process that will make you tired. But to maintain consistency and perseverance in the work you must choose the topic of your interest, that will boost your interest and motivate you to keep going.

Physics is a wide subject having inculcated various topics in it. Writing a research paper on any of the topics of physics would be really time taking and make you feel tired. As it requires a lot of research, experimentation, and practical knowledge.

So, we are going to suggest to you some topics which are particularly related to the sub-branches of physics, interesting, as well as the material on all these topics are available on the internet, so you can choose any of these and start researching and writing.

Best Research Topics Related to the Sub-branches of Physics

The below listed are the sub-branches of Physics

Mechanics is the branch of science and mathematics that deals with the study of motion and the forces that produce motion and result in displacement.

Classical physics is the physics in which, from the physical ideas the newer ideas are predated. It basically encompasses all the theories that are drawn before the 20th century.  Energy and the theory of matter are regarded as independent concepts throughout classical physics.

Quantum physics or quantum mechanics is basically a theory in physics that provides a description of all the physical properties at the scale of atoms and sub-atomic particles.

Modern physics is that branch of physics that deals with the theories which came into being after the 20th century. these theories are quantum mechanics, special relativity, general relativity, etc.

Thermodynamics is that branch of physics that deals with heat, work, and temperature, and their relation to energy, entropy, and the physical properties of matter and radiation. Basically, thermodynamics deals with the transfer of energy from one form to another form, and from one place to another.

Magnetism is a type of force that is produced by moving electric charges. Magnetism creates two forces, force of attraction and force of repulsion.

Geophysics is a branch of natural science that deals with the physical properties and natural phenomena of the earth.

Optics is the branch of physics that deals with the behavior and properties of light. Along with its interaction with matter and the instruments used to detect it.

Electronics is a branch of science to be precise electrical engineering that deals with the emission, behavior, and effects of electrons using electronic devices.

Chemical physics is the amalgam of both chemistry and physics and the branch of science. It investigates physicochemical phenomena and studies chemical processes from the point of view of physics.

Biophysics is a course in science that applies approaches and methods traditionally used in physics to study biological phenomena. Biophysics covers all the scales of biological organization, from molecular to organismic and populations.

Astronomy is the branch of science that is concerned with the physical nature of stars and other celestial bodies in the universe. Astrophysics is a science that uses the methods and principles of physics and chemistry in the study of astronomical objects and phenomena.

Nuclear physics is the branch of physics that deals with the study of building blocks and interactions of atomic nuclei.

Condensed matter physics is the branch of science in the field of physics that deals with both the microscopic and macroscopic physical properties of matter.

These were some research topics on physics that we feel has helped you. A  brief description of every branch of physics was done to make you aware of a bit of the complex words in science. So that your research could become easier and less difficult. Now that you are aware of every sub-branch, you should better start researching, experimenting, and jotting down the findings. Now you are all set to present a research paper on the table.

Get more about research and research topics down here -